New Delhi: The Chhatarpur Metro station on the Yellow Line (Samaypur Badli to Huda Metropolis Centre) will quickly get an underground interchange station to hyperlink it with the upcoming Silver Line (Tughlakabad to Aerocity), with Delhi Metro Rail Company (DMRC) officers saying that the 2 stations shall be related by a subway.

“The Chhatarpur Metro station will turn into an interchange station in Section 4 to facilitate inter-connectivity between the Yellow line and the Silver Line. Whereas the present Chhatarpur station is elevated, the brand new station shall be an underground one and a subway will join the 2 adjoining stations… The interchange facility shall be offered by way of entry gate quantity two of the present Chhatarpur Metro station,” mentioned Anuj Dayal, principal government director, company communications, DMRC, including that the proposed station shall be constructed 18 metres beneath the bottom stage and may have the platform on the backside, adopted by the concourse after which the roof stage on the prime. 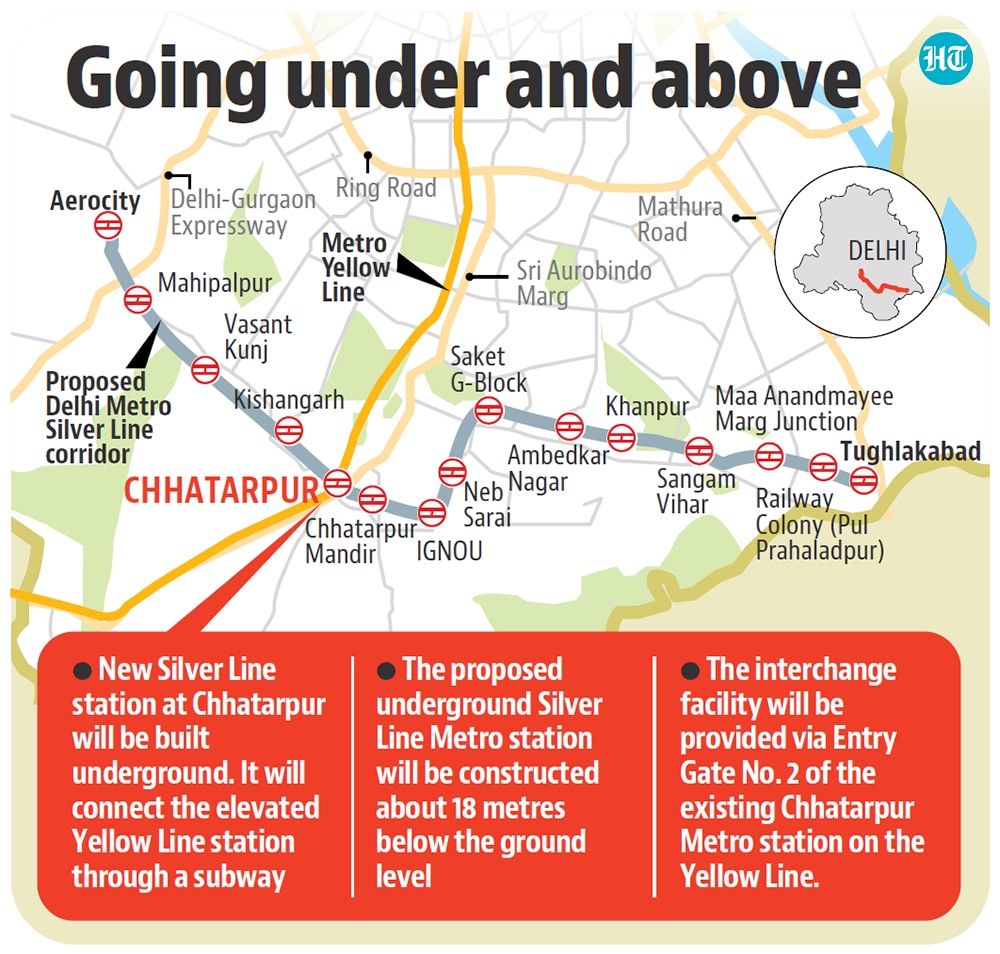 The Silver Line from Tughlakabad to Aerocity is one in all three accredited section 4 corridors, together with Janakpuri West-RK Ashram Marg and the Majlis Park-Maujpur corridors.

DMRC mentioned development of the 23.62-km-long Silver Line hall has already commenced. The road may have 15 stations, of which 4 shall be elevated and the remaining shall be underground. The whole hall is predicted to be accomplished by September 2025.

The Silver Line will not be an extension of any present Metro line and can largely cater to the dense populated areas of Vasant Kunj, Chhatarpur, IGNOU, Maidangarhi, Neb Sarai, Saket, Sangam Vihar and Tughlakabad. Apart from Chhatarpur, it is going to even have interchange stations at Aerocity and Tughlakabad.

“The alignment relies on the proximity to the populated areas to be served, that are principally alongside Mahipalpur- Mehrauli Street, Mehrauli- Badarpur Street and IGNOU Street. As well as, after completion of this hall, individuals of south Delhi and densely populated areas alongside Mahipalpur-Mehrauli Street and Mehrauli- Badarpur Street shall have the ability to attain the Indira Gandhi Worldwide Airport straight or through the use of interchange facility at Chhatarpur Yellow Line station,” mentioned a DMRC spokesperson, noting that at current, passengers needed to interchange on the New Delhi railway station on the Yellow Line with a purpose to commute to the airport utilizing the Airport Specific Line.

In 2019, The Chhatarpur Metro station on the Yellow Line underwent important change as a part of an elaborate multi-modal integration (MMI) challenge of the Delhi Metro, which noticed parking bays for public transport, landscaping and the development of walkways and an amphitheatre outdoors.